The aeropress was invented in 2005 by Alan Adler, who is famous for several inventions such as the Aerobie Pro flying ring which holds the Guinness World Record for the longest throw. 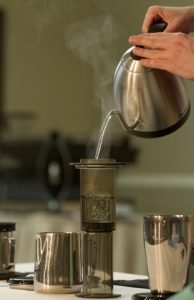 The Aeropress was designed to make a cup at a time. It reminds a syringe with a cylinder that fits inside another one. This tool relies on pressure to extract the flavours: a plunger pushes the air down forcing the water through the coffee bed and the filter, straight to the cup.

The Aeropress is the most versatile brewing method that allows us to play over and over again. It’s also a compromise between making good quality coffee with the limited time available. But, on the other hand, it’s also a good friend to bring when going out, avoiding the buzz of the city or when hiking a mountain.

Technical Specs of the Aeropress

The Aeropress brews only a cup at a time. There is no recipe to follow and there is no silver bullet. As when we deal with all the variables that bring us to extract a good espresso, brewing with the Aeropress need as well an understand of different variables such as:

Depending on what we want to achieve, we need different grinding size. Finer size leads to more contact time and a strong brew rather than a coarser size that brings to a mellow cup.

I already talked in this article how important is to use the proper water.

Now that we know all the variables we can choose to brew with the Aeropress with the regular method or the inverted one.

But which one to choose? Let’s have a close look at the brewing methods.

When brewing with the Aeropress, we can decide to brew it as it has been conceived or with the inverted method.

Now, no one can give you any particular advice or tell you which one is better. That’s because it’s just down to what you want to achieve and your taste preferences.

Maybe it’s your first time and you don’t know where to start? Well, in this case, you might have to consider to start with the regular one.

Another reason to start with the regular method is that brewing with the inverted method can be tricky at the very beginning. The chamber and the plunger of the Aeropress have to be hold tightly with both hands and inverted directly into a mug (after your desired total time of extraction and after having screwed the filter cap).

Anyway, whatever you’re going to brew, chances are that you are going to pick the inverted method if you prefer a heavier cup. The main difference between the two methods is that in the regular one coffee percolates as you push straight with the plunger, whereas during the inverted method coffee steeped in contact with the water which made this method an immersion one.

There are several videos on the net that can show you how to brew with the Aeropress with the inverted method. Once you have managed to replicate a good cup, you can compare the two methods and opt for the one you like the most.

As I told before there’s no magic formula or recipe to follow.

As far as I’m concerned, as the brewing time is short, I prefer to grind the coffee between the size of the espresso and the V60. I usually brew at 80-85 °C starting with 30 seconds of bloom and then slowly pour the rest of the water.

After that, I press for about 30 seconds. I always use a rinsed paper filter, or even more, to achieve a much cleaner cup (a metal filter is used to obtain more body, letting more oils passing through).

I always use the inverted method rather than the traditional one, to increase the contact time between the water and the coffee and to prevent any grit into the cup.

So, if you need to quickly brew a cup of coffee at home or brew it in the middle of the forest, the Aeropress is the tool you need. It’s good to start having a look at the World Aeropress Championship website taking a cue on the winner’s recipes.

Just keep in mind that it’s all about your personal taste. So, play with it, grind finer or coarser, lower or higher the temperature, try different water and of course, use delicious coffee beans.

THE COFFEE AND LEMON EFFECT. 1 BEST COFFEE TRICK TO MAKE IT GREAT

Recently there has been a wave of comments regarding the boom in the news about the use of coffee lemon...

One of the most popular drinks in the world is coffee. It is consumed by thousands all over the globe...

Coffee and climate change: How is it affecting coffee production? Your new N1 smart guide of coffee flavours

Coffee and climate change are two vital factors, and we can’t complete the discussion without writing about these. A...

Chemex vs Hario v60: which one is the best and which to buy

I took the time to explain what is  pour-over coffee in one of my previous articles. As an Italian,  drip...

Ethiopian coffee is appreciated in the world for the quality of its beans. As well as for its famous tradition...

5 of the most important Coffee Certifications – A Helpful Guide

When you buy a cup or a bag of coffee, you want to make sure that yours was grown and...

Coffee lovers knows coffee that high-end quality speciality coffee beans play a pivotal role in producing the most delicate and...

What is the healthiest coffee in the world in 2022?

The healthiest coffee in the world in 2022 For many of us, coffee is a morning ritual and people cannot...

Each of the best coffee roasters in London use their own coffee roasting methods and approach when it comes to...

Much has been said about whether wrong coffee habits make you fat or lose weight, myth or reality? If...