Coffee rust, Roja in Spanish or simply called coffee leaf rust, it’s a (fungus) coffee disease (native to Africa) that is hurting almost the whole coffee-producing countries. The pathogenic agent of the coffee rust is a fungus called Hemileia vastatrix that hit especially the arabica coffee plant by infected its leaves (the ones that grow not high enough are more hit as humidity makes a good habitat for the fungus to spread over) (robusta variety, on the other hand, isn’t as susceptible as the arabica one, make it a rust-resistant plant).

In this article we are discussing the disease in general and its history, the coffee leaf rust symptoms and signs, what can be done by the farmer to partially control/limitate the spread, the economic impact and some of the worst cases of coffee leaf rust that has spread in the past.
Let’s start with the latter.

SOME OF THE WORST COFFEE LEAF RUST CASES IN HISTORY 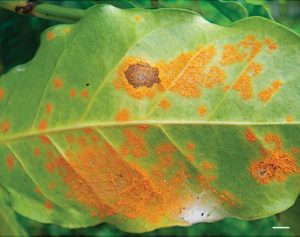 Firstly, the spores of the coffee rust are spread by rain or wind and thanks to the climate change the situation is getting worse year by year (on a small scale also birds and insects contribute to the spread of the disease). The unpredictable weather makes it harder for the farmers to take prompt actions as abundant rainfall and strong winds are more present today than ever.

Anyway, every time it starts from small, yellow spots that turn then, into orange, red, and, at the last stage, brown with yellow borders. When a plant is affected by the coffee rust disease, it presents those spots on the underside of its leaves.

After a few hours, defoliation occurs causing leaves to fall into the ground. At this stage, a plant is not any more able to flourish and the cherries on the plant are not going to ripe enough; besides, the harvest is quite compromised over the following years causing heavy toll on the economy of a country and the farmer’s livelihood.

Tackling coffee rust disease is not an easy task. However, prompt intervention can reduce losses considerably.

Here’s the most used:

It’s not clear which method is better/risky to reduce/control the spread of the coffee rust disease as both management are affected by the disease in several different ways and so it requires further evaluations.

If on the one hand, a full sun exposure results in much more stressful for the coffee plants, on the other hand, shade-grown management presents several different microclimates making hard to set a unique way of tackle the disease. Air and leaf temperatures are reduced by shade whereas relative humidity and leaf wetness are increased (SEE RELATED HERE https://link.springer.com/article/10.1007/s12571-015-0446-9 ). Also, germination is usually inhibited by the sunlight and spore germination tend to spread easily in shade-grown management.

Coffee leaf rust germination and infection are strongly dependent upon the presence of liquid water. It is assumed that a constant rate of spore deposition and that ungerminated spores did not accumulate on leaves during dry periods, and so in each hour of a wet period, a constant number of spores begin to germinate (SEE RELATED HERE https://royalsocietypublishing.org/doi/full/10.1098/rstb.2015.0458).

What is clear is that predicting the first rainfall is paramount for the farmers as they need to plan a series of measures such as how much fertilizers to use.

Appropriate systemic management with preventive fungicide and fertilizers application has seen a reduced risk of spreading no matter the current farm management.

To properly understand the likely impact of climate change on production, and partition out the effects of weather, disease and other factors on coffee yield, a weather-driven coffee yield model is required. For coffee leaf rust and many other fungal plant diseases, temperature and leaf wetness are the most important determinants of infection risk.

Climate reanalysis is the task of the climate research community, but responsibility for recording disease outbreaks, which are the observational data against which models can be tested, lies with the producers, researchers, agribusinesses and plant protection agencies that monitor agricultural systems. It is evident that despite the threat posed by pathogens, serious data gaps remain of where and when outbreaks occur, particularly in the developing world (Bebber DP, Holmes T, Smith D, Gurr SJ. 2014 Economic and physical determinants of the global distributions of crop pests and pathogens).

Introduction to Coffee Scales If you are interested in brewing coffee at home, then you need to invest in proper...

THE BEST UK SPECIALTY COFFEE CAPSULES AND COFFEE PODS IN 2020

Introduction Do you know the coffee pods are the simplest and quickest solution for making a cup of coffee at...

Should you freeze your coffee?

Today I walk you through one question: should you freeze your coffee? Well, it is not only about this, but...

What Is A Coffee Subscription? Coffee subscriptions make it easy to deliver your favourite coffee at your doorstep. Also, they...

How to enjoy your coffee in quarantine time: tips for the perfect brewing

You’re probably craving more for human interactions than food during this quarantine. It is in times like these that we...

1 thought on “The coffee leaf rust”