We don’t know exactly when and how coffee was discovered but at least we know where coffee comes from. Also, there are so many legends about its origin and the most famous is the one I’m telling you now.

Today we are going to talk about the Ethiopian coffee ceremony but first, I want to tell you a little bit about the history of this country and why it’s so famous.

So, an Ethiopian legend has it that coffee is said to have originated in the Ethiopian forests, where the shepherd Kaldi first discovered the coffee shrubs.

More precisely, he discovered that his flock of sheep were full of energy just after they ate from a certain bush of red berries. He noticed that the sheep couldn’t sleep during the night so he took some berries in a monastery and made a drink from these berries.

He found the same reactions from his sheep and soon after that, the existence of coffee was spread and exported over the world.

Coffee plays a big part in Ethiopia not only because it produces more than two-thirds of the country’s earnings. Ethiopian coffee ceremony has got quite a story to tell: It’s something that goes well beyond sipping a good quality cup of coffee. It has been passed down through the generations and it has to be considered as a true and proper ritual moment of friendship and respect.

What is the Ethiopian coffee ceremony

The Ethiopian coffee ceremony is usually led by a young woman in front of the guests and everyone is then welcomed (forming a circle) with a gift such as incense or sugar.

The tradition wants that who leads the ceremony wears an embroidered, long white cotton dress.

Also, the first coffee that comes out is usually served to the oldest person as a sign of respect for the older generations; the coffee is served black but quite often people tend to add lots of sugar in it as the coffee is quite strong on its own.

The guests invited has to drink every cup offered and lavish praise during the ceremony: It’s not mandatory but recommended as a sign of respect for the hospitality. 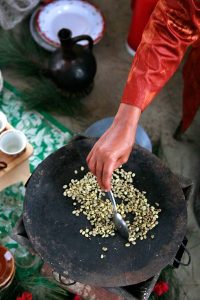 Do not hurry, there are three rounds of coffee servings: 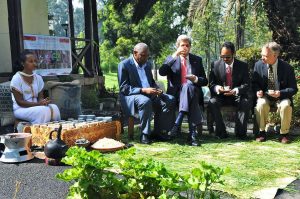 Do not worry about drinking all the coffee: the cups are really small and drinking three times is equivalent to drink a long filter coffee.

Here are some facts that add even more interest:

At this point, you may have realised that the ritual is something more than making and drinking coffee (we are not talking about specialty coffee): the Ethiopian coffee ceremony is more about sharing a moment together with relatives, neighbours or guests.

The Ethiopian coffee ceremony is usually held three times a day and can last for a few hours and opens to several debates such as local politics, gossip and so on.

Just bear in mind that it’s considered impolite to refuse coffee or to not offer coffee to the guests: the coffee ceremony is the way for the Ethiopian to gather visitors so enjoy every single moment of the ritual.

So, sit back, relax and enjoy an excellent example of great hospitality!

Introduction to Coffee Scales If you are interested in brewing coffee at home, then you need to invest in proper...

THE BEST UK SPECIALTY COFFEE CAPSULES AND COFFEE PODS IN 2020

Introduction Do you know the coffee pods are the simplest and quickest solution for making a cup of coffee at...

Should you freeze your coffee?

Today I walk you through one question: should you freeze your coffee? Well, it is not only about this, but...

What Is A Coffee Subscription? Coffee subscriptions make it easy to deliver your favourite coffee at your doorstep. Also, they...

How to enjoy your coffee in quarantine time: tips for the perfect brewing

You’re probably craving more for human interactions than food during this quarantine. It is in times like these that we...