Today it’s time to talk about the history of London coffee houses, from the very beginning to how coffee has evolved until it’s reached the third wave coffee and beyond. The London speciality coffee wouldn’t be the same of today without all that happened since the 16th century.

Before getting through today’s coffee industry, we need to give some background.
Let’s get back to the History of London coffee houses.

The History of London Coffee Houses

Great Britain has been associated mostly as a nation of tea drinkers. In fact, coffee was introduced into the country quite at the same time as the tea but it didn’t get much success; the majority of the people used to drink tea with just a small part of it drinking instant coffee (coffee started to be appreciated around 19th century).

Anyway, coffee was introduced in the UK in the 16th Century via the Middle East (mostly from Turkey).

By 1700, there were more than 3,000 thousand coffee houses in England with 2,000 just in London. In those places, intellectual discussions and commerce ones took place: they were open to everyone but actually, only the nobility could take part. The coffee houses were also called by the nickname “penny universities” as with one penny you could afford to drink a coffee (and to have the admission) sitting around a long big table along with writers, poets, politicians, mathematicians, students and so on. Women were usually unwelcomed to enter a coffeehouse and the main reason was that men believed they didn’t need them as part of their discussion. Bear in mind that at that time a pound for a coffee was affordable only for a few people as any unskilled labourer earned just eight pence per day.

This period has been associated with the decline of the London coffee houses. The truth is that we don’t know what has led into this but different sources pointed out different scenarios. Most of them refer to the increased demand for tea due to the increased competition of the coffeehouse throughout the rest of Europe.

This has pushed the trade of the tea which then became popular at court and in tea houses. As Bramah (a renowned tea expert) said in 1972, the rising of the tea was also associated by the ease-of-use of making it. Bramah said that “to brew tea, all that is needed is to add boiling water; coffee, in contrast, required roasting, grinding and brewing.” So, with the increasing demand for coffee, the British East India Company moved its interest into tea, which was much more convenient to trade than coffee.

But it was not only about this.  With the advent of the gardens (with no charge for admission), London coffee houses were less frequented: in the gardens, they started to serve other drinks such as ale, wine and liquors. And not to forget that also women could get there, enjoying what they liked the most, a cup of tea. That’s why the gardens were also called “tea gardens”. At that time there were four most famous gardens which were Vauxhall, Cuper’s, Marylebone and Ranelagh.

With the decay of the London coffee houses, the consume of coffee moved and increased at home especially for breakfast or late dinner (afternoon still favoured for tea). The first wave of coffee brought coffee to the people.

British used to drink instant coffee, a ready-to-drink coffee that still today comes in a can on the shelves of any grocery. It’s already been grounded and stored in this air-tight container, ready to be brewed just with hot water. So, the consume of coffee increased especially because it was more affordable also for the middle class. 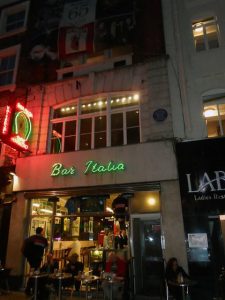 Instant coffee still was the main caffeinated drink for the British habits with someone adding milk and sugar to sweeten it up a bit. But some new coffeehouses started to operate in London as the iconic Bar Italia in 1949 that opened in Soho (and still running).

At that time, plenty of Italian-style coffee shops open their door with Gaggia as the main brand for commercial coffee machines. But in the late 1990s, it is thanks to American giant like Starbucks that London coffee house was “reinvented” and started to serve coffee of better quality with dark roasted Arabica beans and single-origin ones. Lattes and cappuccinos became popular very soon for the Brits that felt in love with the Mermaid brand. Along with them, there were other Italian big chains such as Costa and Café Nero that gained the attention of the country. Although their questionable quality of the coffee they served, coffee started to get more “respect”: drinking coffee was everything but something to wake up.

Nothing changed more or less until the advent of the third wave in which the industry understood that coffee needed more focus on the entire process that starts from the farm and ends to the cup. It’s 2005 and some speciality coffee shops appeared in the country, thanks to the Australian influence and, later on, of the Scandinavian one. From that time on, speciality coffee started to be served in a way to highlight its distinctive flavours: coffee it’s now lightly roasted, brewed mostly as an espresso-based drink.

This was until 2009. From that time on, about twenty speciality coffee shops are opened in London, serving not only espressos but also a few of them serving milky beverage and pour-over coffee such as V60, Aeropress and Syphon.

It’s 2020 now, and no matter on which coffee wave we are, but London is probably one of the best speciality coffee scenes in the world, surely the best in Europe.

What Is Cold Brew And How To Make Cold Coffee?

The cold brew coffee has become fashionable again, thanks to millennials who walk rediscovering the best experiences in the world....

Is It Worth Buying Instant Coffee in 2021?

What do you think when you hear them say Instant coffee? They sure come to mind: easy, fast, low price,...

Coffee and Movies: The Best Coffee Scenes Ever Made About Caffeine

COFFEE LOVERS ALERT! Everyone is a fan of different beverages but most of them have this one thing in common,...

What Is A Cafe Latte And How To Do It Correctly?

Milk is the most frequent companion of coffee. In fact, currently, when we hear the word coffee, the first image...

Caffeine in Coffee – How much caffeine is in a cup of coffee? An Ultimate Guide.

This ultimate "caffeine in coffee" detailed guide will tell you the caffeine content of different types of coffee and coffee...

Can Coffee Filters Be Reused?

Let's talk about how coffee filters can be reused because people ask how to make coffee with the least possible...

6 Starbucks Coffee Recipes You Can Copy

Tell me the truth, how many times have you been wanting a Starbucks coffee because you can't leave home or...

Coffee stains – How to deal with them

Coffee stains are always the worry of coffee drinkers, but why can it be so hard to get out? The...

The History of Jamaican coffee

First, credit must be given to the Arabians for their part in the discovery, use and promotion of the Jamaican...

Coffee and religion: Is Drinking Coffee A Sin For Some of those?

Have you grabbed a cup of coffee, take a sip with your eyes closed, smell good, feel great, look up...

1 thought on “The Engaging History of London Coffee Houses”