Today’s article is about the Sanremo Cafe Racer coffee machine, by Italian company Sanremo, one of the leading coffee manufacturer. Driven by the innovation as its main characteristic, the company is focussed to every detail making its mark and standing at the forefront in the sector.

Sanremo headquarter is based in Italy, Treviso.

It’s also the official espresso machine of the 2018-2020 Coffee in Good Spirit and the World Latte Art competitions.

About the Sanremo Café Racer

The idea was to make something that looks stunning. Inspired by motorcycles, from the dashboards of each headgroup (the first and only that does this) that reminds the dashboard of the motorcycles, the customization made of leather, the tubular design and its lateral support. Obviously is not only about that: Sanremo thought about conceiving a machine that would make easier the role of baristas so to work quickly and efficiently.

And that’s what they brought to life with the Sanremo Café Racer.

The Sanremo Café Racer is a commercial coffee machine that works on volumetric, which means that every single shot that baristas make is weighed in grams.

Its sleek design with the most innovative technology and easy-to-use interface make the Café Racer a high-end commercial coffee machines along with coffee manufacturer such as La Marzocco, Kees Van Der Westen, Victoria Arduino and so on.

Designed for coffee shops with medium volume, the Café Racer aim for stability (it’s one of the most stable machines on the market), precision and efficiency when pulling shot on an everyday basis.

The attention to detail, the ergonomic use and the quality of the material (made of steel) of every single part that makes up the machine are also other key elements for the company. 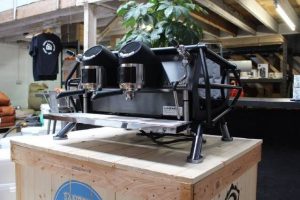 How to choose the perfect commercial espresso machines

I always say in most of the previous article about espresso machines review about how important is to buy a machine that ensures consistent thermal stability throughout the day without pressure drops.

It’s not only that: another key thing to consider is about making sure that the brand you are going to buy is as closest as possible to your coffee shop which means that you can call them and ask for prompt technical assistance. Imagine a day in where your machine suddenly shuts down (and it always happen in a busy time) and you cannot fix the situation by yourself. You need someone that can come ideally in less than half an hour.

The Sanremo Café Racer is not only made for the expert baristas; it’s also an awesome starting point for a beginner one.

According to your taste, the Café Racer comes in three different models: the Naked with a black or steel finishes, the Freedom with a black or steel chassis and the Custom in which there are several customization you can choose from such as the White & Wood or the total black Dolomiti. The two group machine is for sale from £12,000.

Today, I’m not (unfortunately) going to talk about speciality coffee-related topic but about the Italian coffee culture. How is the...

9 WAYS TO USE LEFTOVER COFFEE

We baristas, we normally make/brew coffee as our first task all day long. After every brew, we take out the...

Mahlkonig brand, the king of the grinders was established in Germany in 1924. Initially, the company was founded to produce...

Why is kopi luwak coffee so expensive?

There are more than a few words to explain why kopi luwak coffee is so expensive. To have a clearer...

Coffee and Carbonic Maceration Process We learn and steal a lot from the wine world. Coffee grows and is processed...

A morning Hario V60 coffee has become my morning ritual just after getting out of my bed. At the very...

Today’s article is about the Sanremo Cafe Racer coffee machine, by Italian company Sanremo, one of the leading coffee manufacturer....