I’m starting today with this post about Uganda my blog section about coffee producers and manufacturers around the world.

Uganda has been known firstly for the production of Robusta: around the year of 1860, the country could already boast Robusta plants within its territories (this kind of bean grew already spontaneously before it was imported from Ethiopia).

Uganda is one of the coffee producers that is growing faster between the coffee-producing countries, particularly if you think this increase in production is calculated on an annual base.

Nowadays Uganda is the second coffee producing country of Africa after Ethiopia, the 8th country in the world for coffee productivity and the 3rd for the Robusta production globally.

The Government Authority (UCDA) http://www.ugandacoffee.go.ug has the goal to reach 20 million coffee bags production by 2025. https://ugandacoffee.go.ug/ucda-and-uca-sign-mou-support-coffee-farmers-achieve-targets

It is one of the coffee producers that is growing faster between the coffee-producing countries,

Business-wise, this is one of the most important perspectives regarding the coffee production even if it carries unpredictable weather problems, inappropriate infrastructures and facilities, the inadequate or small use of fertilisers or biopesticides and limited access to financial investment;

Infrastructural investments would help so much this potential area become one of the leaders of the coffee-producing countries.

The main production sources are Robusta and Arabica, respectively 80% and 20%.

The Robusta is cultivated until 1200 meters, the plans are harvested by the dry process which is a natural growing Technic.

Nowadays The robusta grows in all the country!

The Arabica instead grows until 2300 meters mostly by washed process and there are 3 different areas where it grows well: The east part of the Mountain Elgon, in the West Nile, the north-west part of the country and on Rwenzori Mountain in the south-west. 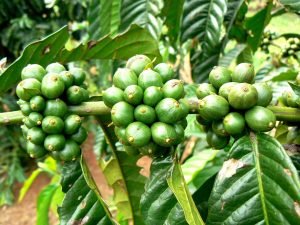 The coffee is the most lucrative cultivation in that country.

The cultivation of Arabica is made within the shadow of big fruits plants (such as banana plants) which permits a better maturation of the beans, less need of water and a smaller use of agricultural fertilizers.

The Arabica varietals that are mostly being cultivated are SL 14, SL 28, Typica and Kent. All of these, except for the Typica variety, are very high in yields. However, it takes a lot of effort to take care of all these plants because of their low resistant to nematodes, coffee berry disease (CBD) and coffee leaf rust.

It’s not only about potential, but it’s also quite becoming a real thing. The government is now focusing on the increase of the coffee production by increasing the investment in any kind of facilities such as investment in the drying infrastructure and supporting farmers by providing farm inputs. This enables the farmers to take action directly on the tree; for example by weeding, stumping and pruning and lowering the use of fertilizer. But it’s not only this: to ease the access of finance allows farmers to invest in wet mills instead of the current home-processing methods such as hand-pulping and also investing in water tanks to collect water for everyday use. This would contribute to raising the quality of the current processing method and consequently on the quality of the final product.

In my opinion, this country will have a bright economic future due to its coffee production.

We will soon hear about high-quality Arabica coffee production from Uganda!

Is It Good To Drink Coffee Before Training Or Going To The Gym?

When it's time to exercise, how many times have you wished you had a little more energy to start with?...

What Is An American Coffee And How To Make It Right?

The American coffee is erroneously listed as a watered-down espresso. Some discriminate against it as one of the least attractive...

Making coffee at home is an art form. The busy baristas you see in cafes in the morning are in...

What Is Cold Brew And How To Make Cold Coffee?

The cold brew coffee has become fashionable again, thanks to millennials who walk rediscovering the best experiences in the world....

Is It Worth Buying Instant Coffee in 2021?

What do you think when you hear them say Instant coffee? They sure come to mind: easy, fast, low price,...

Coffee and Movies: The Best Coffee Scenes Ever Made About Caffeine

COFFEE LOVERS ALERT! Everyone is a fan of different beverages but most of them have this one thing in common,...

What Is A Cafe Latte And How To Do It Correctly?

Milk is the most frequent companion of coffee. In fact, currently, when we hear the word coffee, the first image...

Caffeine in Coffee – How much caffeine is in a cup of coffee? An Ultimate Guide.

This ultimate "caffeine in coffee" detailed guide will tell you the caffeine content of different types of coffee and coffee...

Can Coffee Filters Be Reused?

Let's talk about how coffee filters can be reused because people ask how to make coffee with the least possible...

6 Starbucks Coffee Recipes You Can Copy

Tell me the truth, how many times have you been wanting a Starbucks coffee because you can't leave home or...