Contents show
1 Detpak: a bit of history
2 What makes these cups easy to recycle?
3 How does the Detpak RecycleMe Take Away Cups system work?
4 Detpak coffee cups
4.1 Share this post:

The term sustainability should be embraced any coffee shop, from the smallest and independent one to the big chain players . It should be put in practice as soon as possible as we are ruining the world with the atmospheric CO2 level increasing month after month.

Do not do that, means we are responsible for the ecological balance, being harmful to the environment by draining the world of its natural resources.

What a coffee shop can do in term of sustainability? So, well, let’s just cut to the chase.

Take-away cups are plastic-coated no matter what they make us believe. That’s why we just think we are saving the planet when we end up drinking from a compostable cup.

That plastic lining cannot be removed easily with the existing composting process and even when PLA is broken down, it ends up into microplastics.

But luckily, an Adelaide -based company called Detpak is taking care of this problem with a recycling system that was first launched in Australia and New Zealand.

But Just before getting into details let’s have a look of this company.

Detpak: a bit of history 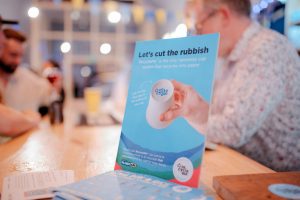 Detpak is part of the Detmold Group and it’s a specialist paper manufacturing. One of its goals is to tackle all the wastage that ends up to the landfill.

It all started in 1948 but it’s through the years that it built its reputation, serving and collaborating with leading brands such as Starbucks, McDonald’s, KFC, Burger King just to mention a few.

It also won around 40 accolades over the years and it’s now making a huge effort in the coffee industry.

It started first in Australia and New Zealand were a billion of cups were ending up to the landfill every year. The company developed a recycling system called “RecycleMe™” endorsed by Planet Ark.

What makes these cups easy to recycle?

The cups are made with a next-generation lining made from ethically sourced raw materials which are easily removed from the traditionally pulping system that is in place already worldwide.

The RecycleMe™ are made using EarthCoating® technology, an innovative mineral-based lining which is then easily processed during the pulping process.

The company can currently recycle up to 96% from each RecycleMe™ cup. The lids of the cup are also recyclable and have to be separated for collection.

Recyclable lids are then converted in photo frames.

After being launched in Australia and New Zealand and having lots of success with leading coffee roasters, food festivals, sporting tournaments and many others businesses, the RecycleMe™ system landed and officially launched in the UK on Thursday 20 September 2018 with leading coffee roasters such as Colonna & Smalls, Prufrock, Caravan, Taylor St Baristas and many more.

The recycling system has been introduced with Detpak and with the collaboration of the brand Shredall. The successful idea is bringing more collection point in the next few months as the Shredall managing director Nik Williams said:

“Shredall currently has 13,000 collection points around the UK and will support the establishment of additional collection stations for RecycleMe Take Away cups.”

How does the Detpak RecycleMe Take Away Cups system work?

The company built a system in which they collect the cups and convert them into high-quality paper products recycling the same cup up to 7 times.

Nik Williams said that  “takeaway coffees are an ingrained part of our everyday lives, and with this new system, we can massively reduce the environmental impact of that and continue to enjoy our coffees safe in the knowledge that our cups will go on to be reused up to seven times.”

The collection system is really simple: the takeaway cups are collected in a RecycleMe™ front of house collection station in which the cups are separated between the lids, the cups and the coffee in excess.

After being collected into the dedicated bin, the cups are then picked up by the firm Shredall turning the cups in high-quality paper products.

After being tested, Detpak and Veneziano Coffee Roasters (a leading coffee roaster in Australia) have launched the “Precision Series cups”.

The aim is to debunk the perception of value that the standardization of takeaway cup sizes has been brought by the big chains. Craig Simon of Veneziano Coffee Roasters has said: “currently, take away coffee cups in the market offer no consistency.

We tested existing in-market products sold as 6-ounce, 8-ounce and 12-ounce, and rarely did they measure accurately. All cups, in fact, were larger than advertised volume by as much as 20 percent. “Due to takeaway cups being significantly larger in volume than dine-in cups, baristas find it difficult to achieve a consistent taste experience with the recipes they use.

Unfortunately, in most cases, extra milk is added to the same espresso volume, resulting in a weaker takeaway coffee for the customer.”

And now the challenge is to re-educate our customers because their perception of what is good is in the cup with bigger size rather than 6 ounces flat white or an 8 ounces cappuccino.

People think that there’s no value placed on these cups because they associate longer milk beverages drinks as their daily and high-quality ones. And that’s pretty similar when it comes to steam the milk.

Most of the people perceive value only when the drink is “extra hot” which means that the temperature of the milk is above 70 degrees. This leads to the formation of the casein tannate that makes the drink indigestible to us and by the time it might cause intolerance to dairy.

Detpak is now moving into towards more structured and promoting its RecycleMe™ Take Away Cups systems into other businesses such as stadiums, hospitals and power stations.

It also recently launched the Detpak’s Latte Art Smackdown in partnership with Taylor St Baristas at the London City Runners Clubhouse in Bermondsey on Wednesday 14 of August.

It was the first smackdown in London after the successful ones held in Australia and New Zealand with £300 prize money and exclusives prizes from Brewed by Hand and Project Waterfall.

THE COFFEE AND LEMON EFFECT. 1 BEST COFFEE TRICK TO MAKE IT GREAT

Recently there has been a wave of comments regarding the boom in the news about the use of coffee lemon...

One of the most popular drinks in the world is coffee. It is consumed by thousands all over the globe...

Coffee and climate change: How is it affecting coffee production? Your new N1 smart guide of coffee flavours

Coffee and climate change are two vital factors, and we can’t complete the discussion without writing about these. A...

Chemex vs Hario v60: which one is the best and which to buy

I took the time to explain what is  pour-over coffee in one of my previous articles. As an Italian,  drip...

Ethiopian coffee is appreciated in the world for the quality of its beans. As well as for its famous tradition...

5 of the most important Coffee Certifications – A Helpful Guide

When you buy a cup or a bag of coffee, you want to make sure that yours was grown and...

Coffee lovers knows coffee that high-end quality speciality coffee beans play a pivotal role in producing the most delicate and...

What is the healthiest coffee in the world in 2022?

The healthiest coffee in the world in 2022 For many of us, coffee is a morning ritual and people cannot...

Each of the best coffee roasters in London use their own coffee roasting methods and approach when it comes to...

Much has been said about whether wrong coffee habits make you fat or lose weight, myth or reality? If...